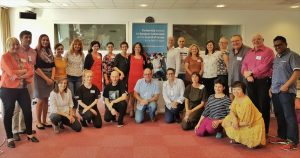 The current developments in Europe raise some concern about its future. The main concern these days is to preserve European principles and prevent a return to nationalist tendencies.

The idea to discuss Europe’s current situation and the potential role of youth policy and youth work in fostering the European spirit is rooted in the “shock day” in June 2016 when Brexit happened, but also in the growing nationalism and populism across Europe. The list of current challenges is long, beginning with the lack of solidarity between European countries in essential political issues, in particular the integration and hosting of refugees and the social divide.

What are the aims of the conference?

Ideas and motivations to organize the conference are to create an environment for critical debate on European values and the future of Europe while making youth work more political and more European. Accordingly, the conference aims at reflecting on common European issues such as democracy, citizenship, solidarity and the social dimension of Europe as well at motivating and mobilizing participants, in particular young people, to act for the idea of a strong Europe. It will provide an opportunity to exchange on shared European values and the future of Europe and to deepen the dialogue beyond borders and between citizens.

The conference shall also contribute to the reflections on the new EU Youth strategy and the EU campaign “12 ideas”.

About 120 participants are expected to take part in the conference; among them will be youth workers from diverse levels and backgrounds as well as policy-makers, decision-makers, officials, researchers, stakeholders and members of European networks in the field of youth. If you are coming from any of the Erasmus+: Youth in Action Programme Countries, and if you consider yourself as youth worker, trainer, youth leader, youth project manager, youth policy maker, volunteering mentor, or youth researcher, you are eligible to apply!

In order to apply, please fill in the application form on SALTO-YOUTH: https://www.salto-youth.net/tools/european-training-calendar/training/european-conference-regaining-europe-the-role-of-youth-work-in-supporting-european-cohesion.7696/ and submit it by 20th January 2019.

We are looking forward to receiving your applications!