The platform provides a space for youth advocates to exchange information and experiences from their work in the field of sexual and reproductive health and rights (SRHR) in Eastern Europe and Central Asia.

“Speak Act Change” connects youth advocates by simultaneously acting as a form of social media, a resource centre and a space for blogging and accessing up to date news in the fields of SRHR and youth rights.

If you are a young person, not only in the region of Eastern Europe and Central Asia, and you want your voice to be heard, join the platform.

The United Nations’ International Mother Language Day annually celebrates language diversity and variety worldwide on February 21. It also remembers events such as the killing of four students on February 21, 1952, because they campaigned to officially use their mother language, Bengali, in Bangladesh.

International Mother Language Day recognizes that languages and multilingualism can advance inclusion, and the Sustainable Development Goals focus on leaving no one behind. UNESCO believes education, based on the first language or mother t****e, must begin from the early years as early childhood care and education is the foundation of learning.

Languages, with their complex implications for identity, communication, social integration, education and development, are of strategic importance for people and planet. Yet, due to globalization processes, they are increasingly under threat, or disappearing altogether. When languages fade, so does the world’s rich tapestry of cultural diversity. Opportunities, traditions, memory, unique modes of thinking and expression — valuable resources for ensuring a better future — are also lost.

Every two weeks a language disappears taking with it an entire cultural and intellectual heritage. At least 43% of the estimated 6000 languages spoken in the world are endangered. Only a few hundred languages have genuinely been given a place in education systems and the public domain, and less than a hundred are used in the digital world.

Multilingual and multicultural societies exist through their languages which transmit and preserve traditional knowledge and cultures in a sustainable way.

International Mother Language Day is observed every year to promote linguistic and cultural diversity and multilingualism.

Today there is growing awareness that languages play a vital role in development, in ensuring cultural diversity and intercultural dialogue, but also in strengthening co-operation and attaining quality education for all, in building inclusive knowledge societies and preserving cultural heritage, and in mobilizing political will for applying the benefits of science and technology to sustainable development.

In 2012, the UN General Assembly designated February 6th as the International Day of Zero Tolerance for Female Genital Mutilation, [...]

Up to 90,000 children in central Mozambique urgently need humanitarian assistance in wake of Cyclone Eloise

More than 176,000 people, including 90,000 children, in central Mozambique are likely to need humanitarian assistance in the aftermath of [...]

As you know the Nairobi Summit on ICPD25 is coming soon.
At PETRI-Sofia we prepared a toolkit […]

“I just want basic things! – We are not there yet”: Understanding the needs, services and challenges of LGBT community members and NGOs in Sofia, Bulgaria [Research report] 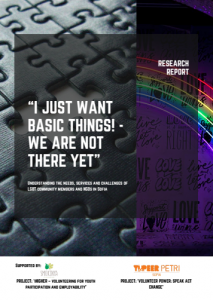 The crisis we are experiencing today is not only health-related, it is also economic and social. This is due to […]

The integration of young refugees: an important work to which international organizations and NGOs are committed.

Youth representing the majority of asylum seekers in UE

The impact of COVID 19 on the most vulnerable populations, particularly women.