On 25th of June, members of the PETRI Sofia team, the EVS volunteers Viktoria Bondikjova and Angela Georgieva from North Macedonia organized a workshop with high school students in the school “St. Kiril and Metodiy” in Radomir. They presented the work of the Y –PEER-PETRI Sofia by promoting gender equality practices as well as discussing all forms of gender-based violence.

Also, they presented the online advocacy platform – YouthLead by providing information about the benefits of this tool as a way to create positive social changes.

The aim of this activity was to develop knowledge and understanding about sexual harassment,violence and sexual assault.

By using interactive methodology, the task for the students was to question the myths and facts about gender roles, sexual aggression, rape and attack. In addition to that, students gave an explanation and their points of view for each statement.
There were 15 students who actively participated in the discussions, gave different opinions, debated and elaborated on the topics of gender-based violence.

At the end, we concluded the workshop with examining follow-up actions by giving suggestions about preventing and addressing sexual assault and providing online resources to take action against gender-based violence. 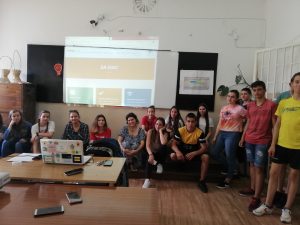 About the Author: Angela Georgieva